A Realme phone bearing model number RMX1833 is spotted running through Geekbench, and the benchmark score hints at the mid-range smartphone. The listing shows the phone was powered by a Helio P60, ran Android 8.1 Oreo and packed 4GB of RAM.

However, the other chief specifications of this Realme device remained unmentioned. It is also unclear if the phone would be launched soon. It is suspected to be called Realme 3, and will be marketed as the Company’s first phoneto be powered by the Helio P60 after Realme 1. The other Realme phones are powered by the Snapdragon processors. 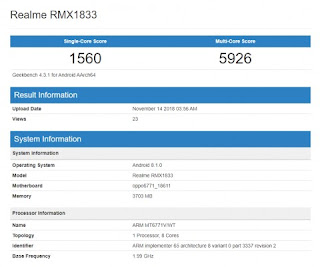 Realme 3 runs Android 8.1 Oreo, which should have ColorOS 5.2 on top. The list contains single-core score of 1560 and a multi-core score of 9526, which hints the chances of being a new mid-range Realme smartphone, that could be priced above Rs 10,000….Read More>>